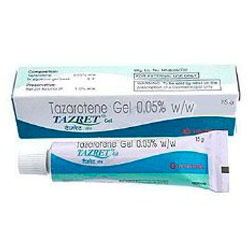 Tazarotene (marketed as Tazorac, Avage, Zorac, and Fabior) is a third-generation prescription topical retinoid sold as a cream, gel, or foam. Tazarotene is a member of the acetylenic class of retinoids. This medication is approved for treatment of psoriasis, acne, and sun damaged skin (photodamage). It is commonly sold in two concentrations: 0.05% and 0.1%.

Tazarotene is a retinoid prodrug which is converted to its active form, the cognate carboxylic acid of tazarotene, by rapid deesterification in animals and man. Tazarotenic acid binds to all three members of the retinoic acid receptor (RAR) family: RARα, RARβ, and RARγ but shows relative selectivity for RARβ, and RARγ and may modify gene expression. The clinical significance of these findings is unknown.